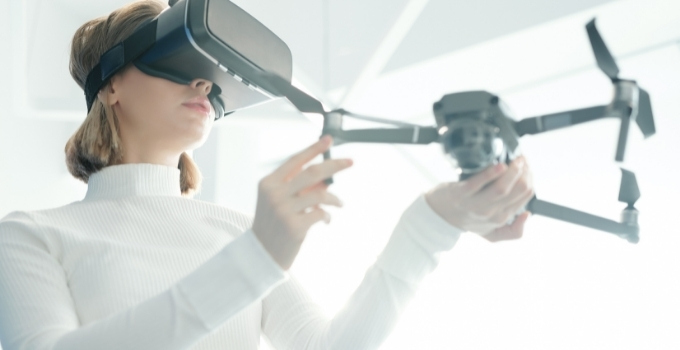 In this technology-dependent modern time and age, drones have become an essential part of many fields that involve our day-to-day lifestyle. For example, you will notice the usage of drones in photography, supply services, military purposes, and even in outer space research.

Drones are mainly crewless aircraft or vehicles (UAVs). It’s also referred to as aerial vehicles without a pilot. You can control their flight path through remote control from a long-range distance using some specially developed software for drones.

This software helps the drone to fly via GPS with help from other onboard sensors.

If you want to know more about what drone means and other relevant topics, then read through the article.  We promise that it’ll be a thrilling ride.

What does a Drone Signify?

For the novices, who don’t know what a drone means, let’s say that it’s just like a robot with a controllable embedded system. Electric or reciprocating engines power these unmanned aircrafts.

As aerial vehicles, drones are capable of controlled and sustained level flight in standard condition. They can also accomplish awe-inspiring beginning  tasks. Drone technology has gone so far that you will even see its usage in the aerospace industry.

In the early twenty-first century, when someone asked the meaning of a drone, you could pretty much presume that they were asking about the robot-like vehicles that were only usable for military missions and aerospace technologies.

But in the present time, the usage of drones is everywhere, from photography to delivery services. The technology is so advanced that UAVs can operate without a pilot on board. You will see its capability on different levels of autonomy.

How Drones have Evolved: From beginning till today

The history of drones is not a mythological one. The first trace of drones was found in Italy in 1849.

But the first unpiloted- aircraft was used during the first world war. Men saw crewless planes that were carrying bombs. The United States Army developed this experimental catalog.

As time passed by, the UAV technology caught more attention in the military agencies and aerospace industries. Military drones got popular day by day, and they were used to jam communications or as a decoy in the war.

After that, the US government concentrated more on drone technology and decided to make a US drone fleet. Many countries were inspired by it and started to develop their drones.

But in the twenty-first century, we came to know about drones a bit differently. In the first decade, a decision was made to manufacture commercial drones for customers whoever interested.

However, as the market is gradually expanding, there is also noticeable development in the education of autonomous drones.

What mechanism makes the drone work?

After learning about what drone means, you must be questioning yourself how it works?

The drones consist of a power source (battery or fuel), propellers, rotors, a flight controller, and a mainframe. Military or delivery drones are made of lightweight composite materials.

The drone needs several components to ensure the flight because it is not easy to fly something without a pilot on board. It further requires a remote-control device to control launch, navigation, and landing.

The drone needs human control to run the device. Specific software is developed to run a drone where the computer programs will act as a pilot in command. It will also work automatically based on flight conditions.

Most drones also contain electronic speed controllers (ESC), GPS modules, antennae, receivers, cameras, thermal sensors, accelerometers, and altimeters. Some drones are also made with customized ultrasonic sensors. But they are used for spying.

Must be Features of a (Trademark) Drone:

Any time you want to discuss the real-time features of drones, it will always tie-up with the types and features. This includes recreational, photography, military, and commercial usage drones. It would be best if you also looked at the other features of modern drones:

There are also virtual positioning systems that help in the purpose of landing. Downward-facing cameras with ultrasonic sensors determine how close to landing the drone is while above the ground.

The collision avoidance sensors were used to detect objects and eventually it is now used to avoid obstacles during flight times.

But the GPS with an onboard altimeter is the most crucial part of a drone. That is because you can control drone regulations and altitude information with GPS pretty easily.

Where Do Drones Come Handy?

The usage of drones is not limited to certain areas only. They are tenable in diversified ways and in numerous places. However, we are gonna unveil some of the major fields in brief detail.

The GPS correction technology in drones is revolutionary. As human beings are prone to kinda fragility and limitations, sending drones (or even robotic stuff) can be a prudent choice. So instead of humans, we can send a drone to navigate the whole area and to operate perilous missions.

The drone will use the correction technology technique and can easily penetrate through any tricky barricaded area.

A statistical report shows that 4% of vital organ deliveries are delayed due to some logistic or traffic reasons. Using drones can be a great alternative in such cases, as there’s no traffic in the sky yet!

If you need emergency medical supplies in unreachable areas, drones can come to your aid. Even the traffic won’t be able to delay the delivery of medications.

It is no wonder that drones also come handy in outer space exploration. Most space associations, most notably NASA have been using drones for testing different things in outer space.

Until the last century, it was a bit of a secret to all. However, due to the reactive autonomy of those drones, their projects have been quite a success. Though challenges are lurking afoot to overcome.

Delivery drones are used to transport certain commodities in remote areas. Different commercial companies are experimenting with delivery drones to see their efficiency. But these types of drones do not take part in any kind of law enforcement systems or surveillance.

The most oft-spoken use of drones is noticed in military services. At present, the technology of drones is more advanced than ever. It can be used for stealth operation, getting crucial info from the enemy and much more complicated jobs.

Bringing A New Era of Photography and Vlogging

For photographers and vloggers who want to take expansive aerial photos, drones have been a boon. The degree of autonomy helps them to take pictures like a bird’s eye view. In addition, they provide a new level of exposure to the photographers.

The fantastic flight controls of drones will give you the ability to track wildlife, which is otherwise impossible for normal humans. Moreover, these drones are not as expensive as the military ones. So, they can be a better choice for the Forestry department.

Based on the usage, drones are also of three types: Personal, hobbyist and commercial. They have certain differences as well. Let’s get to know them closely.

Personal drones are kind of playable objects. Many students use them in their projects.  Sometimes they are usable in surveillance, but legal permission is needed for that.

The hobbyist drones are for the experts. Those who have extreme knowledge about advanced autonomy are suitable to use these drones. They also know various rules about drones, commonly known as ground validation.

Design Oriented Drones in the Market

When you have learned enough about a drone’s definition, you must think of it as a single type of robotic machine. But trust us, there are various types of drones in the market.

The design of the fixed-wing drones makes them more prominent. The government agencies mainly use them for non-profit purposes like the delivery of essential ingredients.

Scientists use these drones instead of commercial flights to carry large amounts of equipment. But the military use them to carry out strikes as they have to maintain it from a ground control station.

Drone deliveries become possible due to single rotor drones. It is because they can easily transport heavier objects. You can also use them to survey lands, map erosion, research storms, or other drone mapping purposes.

If you see a small bird staying in the same position, it could be a drone. This type of drone uses electric motors to reduce noise. Earlier in the decade, gas-powered single rotor drones were also popular.

If someone is looking for a micro-air vehicle, we will recommend this one. The multi-rotor drone can fly for a couple of minutes with remote piloting. But it can carry very lightweight objects such as data, camera, etc. Hence, it is best in the consumer market and for vloggers.

Drawbacks that Drones Have in Common

Just like any other technology, drones also have some technical drawbacks. Here are some of the few to help you understand better.

Well, when someone wants to use anything with bad intentions, technology has no faults. It depends on who uses the drone and for what purpose.

There is usually an unmanned aerial vehicle systems association in every country that decides some code for drones. However, the principles are so restricted that sometimes you may get a legal notice for violating them.

The first and foremost rule is the range of height during flight. It won’t be wise to fly a drone above 500 feet. Some other rules are:

Will Drones Dominate the Future Sky?

At the moment, the drone market is very aggressive and optimistic. It has already reached its boundary. But experts say that science is limitless. So the best is yet to come.

As the future of drones is promising, many companies are interested in investing in them. In 2016, the overall revenue of the drone business reached 12 billion dollars. The usage growth of drones in outer space research is more expansive than in any other field.

Even the business analogists say that the drone business will be worth 127 billion dollars by the end of 2021.

No, airplanes are not like drones. They need a pilot.  On top of that, there will be a risk of losing control over it. However, there’s a great possibility in the future.

Are there any restrictions on flying a drone?

Of course. You have to follow the rules of drone flying made by national aviation agencies. Otherwise, you might face legal issues.

Can I get a drone?

It depends on your purpose. For example, you can buy drones for your personal purpose or photography. You can get a drone online stores like Amazon.

Can a drone be used to observe microorganisms?

Yes, it can be used to observe microbes. But you have to attach a customized biological sensor or microscope to the drone.

The usage of drones is expanding day by day. As drone technology is evolving, it is attracting more and more people, especially amateurs and business conglomerates.

If you find any interest in drones, we hope this article will help you better know what drone means and their uses. Believe it or not, drones are gonna rule the future sky.

So, be familiar with them from the beginning. And please be responsible if you get one! Voila, we leave you here, buddy!